skip to main | skip to sidebar

What are you waiting for?
Go and make your very own operator righ here!
Posted by BROton at 2:04 PM 78 comments:

"Nobody should pin their hopes on a miracle."

Well I think it's obvious that Inna Woods isn't coming along. It looked promising for a while with an actual team getting into developing it, but it's been dead quiet at their end for a while now.

As for me I've exhausted myself with other projects and can't bring myself to get IW up and running by myself just now. Maybe some day it gets fired up but that'll have to happen with a local dev team and more time in my hands. Seems international developement isn't quite that easy..

So please accept my apoligies and thank you for your enthusiasm and support.

I for one had some good times with you komrades.
Posted by BROton at 2:40 PM 54 comments:

Been pretty quiet for a while. I tried to enjoy my summer but it's too damn hot to do anything. But it's time get my head back in the game and here's a little update.

So here's the new inventory system. It seems that the java version of this will have to wait since the guys working on it decided to go AWOL on me when it was pretty much ready to go online.

I added the load carrying equipment feature and made the weapon slots more comprehensive. It's pretty simple system where the weapons can be equipped based on their category. (long, medium and compact)

This naturally means that your character will have these three weapons in use during battle and switching between them is faster than dragging weapons from backpack to the weapon slots.

The new inventory system enables more items to be carried at once but their weight will have a big say in things. carrying a heavy backpack in a fight will cause penalties to character's speed and maneuver.

Load carrying equipment (vests, satchels, backpacks) can be loaded with any items you want and they can be dropped and picked up with all their contents inside. This eliminates annoying dragging and clicking when large quantinty of stuff must be moved around (i.e dropping a heavy backpack full of camping gear and food when engaged in a firefight). 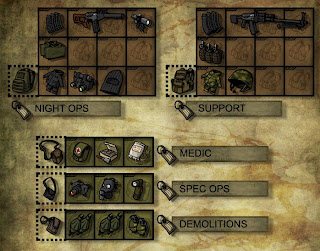 This also enables a quick gear change for individual operators. You can fill backpacks with different gear inside and just by changing packs your operator is equipped to a completely different task. (i.e from support gunner to night ops) the packs can be labeled and named to whatever you want them to be called.

Backpacks and other items can be stored in various vehicles available in the game.
More about that later.
Posted by BROton at 3:25 PM 22 comments:

When the player starts a new game he gets to create his avatar, the main character who will be doing his fighting for him.

First comes the superficial aspect. Sex, face and voice of the character.
Adjusting the facial features you won't have the same freedom as pretty much every RPG out there today has, where each and every facial feature can be adjusted, which in a long run leads to every character in the game looking a bit off and on some level exactly identical to each other because they all are based on that very same model that have been modified just a little bit. 2D drawings would have the advantage of originality and variability, but is a lot more burdensome road to travel.

Instead I'm thinking of combining those two. There would be series of stylized meshes for the player to choose from for the head shape. Eyes and mouth would be sort of animated textures on the mesh. I loved how they did the facial animation in Grim Fandango so that's the style I'd like to try out. 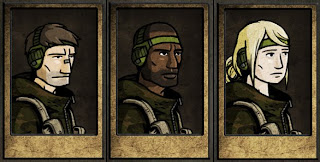 (These are just placeholders I've been using for UI design.)
The character's skill creation sequence is like a job application. The player fills out the forms and decides what kind of character he will play. Where they come from, how old they are, what kind of training they've had, all kinds of personal information that some won't even have much to do with the game itself.

After this the player is given a certain amount of skill points which he can deploy any way he wants. These points determine the character's talent in various skills and attributes which will be needed during the game.

After filling out the basic forms the player will decide the specialization of the character. Two can be selected from a long list of different military skill sets, which will give a hefty bonus to skills involved in that area of expertise. This decision has a lot to do with the course of the coming game because different specialists fight a different battle. So if you decide to be medic, you won't be sniping headshots while sitting in a tree any time soon.

Skill points won't be earned after the initial character creation. Instead you will improve the skills by practising them. For example by shooting, you become a better shooter, you won't earn points from it which could be deployed in another skill like stealth. So a medic can become a sniper only if he practices with a sniper rifle.

As you can imagine you won't be able to create a super soldier who is a master in every aspect of the game right at the beginning. Instead you can (or it is recommended to) concentrate on few selected skills so your character won't be mediocre at everything but lousy at some skills but promising in others.
This is the recommended way because you're not fighting a one man war. You can hire up to twenty other characters to your aid whose expertise will compensate your character's lower skills. 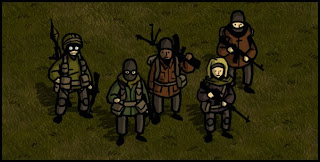 These characters can be professional mercenaries from every aspect of warfare or volunteer freedom fighters who will be willing to join the fight as the game progresses. They are much cheaper to hire than the expert mercenaries, but this shows in their lack of skills.
Posted by BROton at 12:18 PM 22 comments:

Thanks to /k/ I noticed that the old inventory system didn't work so well, so I overhauled the entire thing and added few more features. The online version will be up soon and you'll get to play around with it.
Picture below isn't the new system, you'll see it when it gets online. 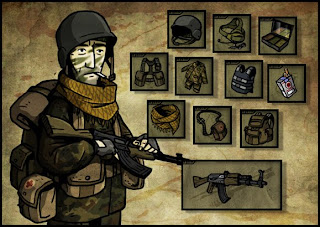 Another thing I've worked on is the item combining system to create improvised weapons and explosives and other gear by attaching different items together. This way you can make molotov coctails and lots of other stuff that goes boom. 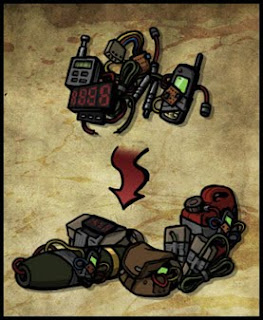 Seems the inventory sheet has become a popular timekiller in /k/. People have been asking for a simpler way to make them so a java version will be made soon. This gives a good chance for me to see all the things I've overlooked when designing the thing. Might take some time if there's too many problems but we'll see how it goes with Tactikool. 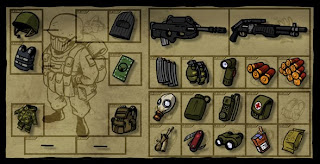 Other great news is that a generous offer was made which I couldn't refuse: innawoods.com is now dedicated to this project and a proper website will be designed in the near future, thanks to Serv.

Actual game development is still standing still and propably won't start until August. I've been in contact with a group from Gotland University and at the moment they seem to be the best chance for Inna Woods to reach the prototype stage.

Platform:
Goal is a typical PC game, not flash or browser based but an actual commercial game like any other. Don't know about multiplayer yet either. Details are not available because there are none regarding this stuff at this point.


Genre:
The game is much influenced by such legendary epics as X-com series, Jagged Alliance2, and Fallout 1 & 2. I won't pretend this is all original ideas and ground breaking achievements in gaming world. It is merely a modest praise for the cornerstones of gaming history which still hold a high place in the hearts of gamers even today, more than a decade after their release. Mostly because only few have attempted and have failed miserably to best them in their genre.

Turn-based strategy:
The game is, as mentioned earlier, a turn-based game. This means that when battling your enemy, you and them have your own turns during which you will control your characters and the other participants will wait for their turn. Just like in chess.
Turn-based allows your strategies to be concidered and executed more precisely when you don't have to worry about your enemies trampling your characters while you're still pondering your next move.


RPG elements:
At the beginning, the player gets to create his/her own mercenary who is the main character in the game. This includes facial features, skintone and hair color and other details and selecting a set of skills to which he/she will specialize in. The selected skills will have an enormous affect to the gameplay as different specializations lead to entirely different game experience. The skills will naturally improve as the game progresses.
In the actual game the player will be able to talk to the inhabitants of the world and take up quests and missions from them in order to gain trust and of course compensation for his troubles.
There are plenty of basic social aspects in the game such as bartering, lying etc. and the world is very dynamic regarding the relation between the player's characters and the NPC's. Different attitudes result in different reactions.


Graphics:
I know this will upset some of you, but most likely the game will be made in 3D environment that only mimics the 2D style. This is simply the most reasonable choice concidering time and effort it would take to create everything in 2D but it will NOT compromise the traditional looks in any way, that's where I draw the line and if that crashes this whole project...
then I'll reconsider.

The actors and objects will be fixed in a top-down isometric view and the environment would be divided into isometric squares where everything sets and plays by the same simple rules. There won't be amazing rag-doll effects and completely free environment to run about. The most improtant reason for this is for the player to actually recognize and read the environment.
For example you'd be immediately able to tell where your character is safe from enemy fire simply by looking at the area. Swirling camera angles and complex 3D terrain and characters with actual dynamic collision surfaces makes this sort of judgement hard as you can only see the circumstances from top down view.


Artistic style:
The style is somewhat cartoony and simple as the main goal is to achieve a very vast, gameworld and the immersive environment which best manifests in variability. (these pictures do not represent the final looks)
Characters are also crafted simply which leaves room for the imagination to work its magig and enables many variable versions to be created from a single model simply by colors and textures. This is by far a much better way than attempting to model detailed versions of every single weapon and gear that will be available.

The ultimate goal of the game mechanics is to create that sandbox where we played with our tiny plastic soldiers when we were kids and add a ton of weapons, explosions, shrapnel and blood into the mix. This will create a contrast between the cartoony looks and immense violence and gore that is the reality of any war.